This is gothic in its beautifully real hatred, regret and a houseful of secrets. 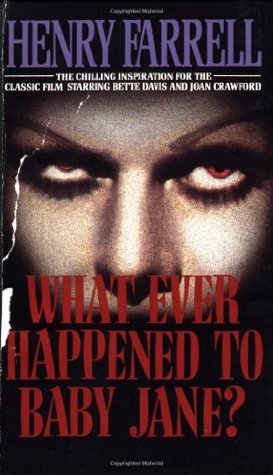 What Ever Happened to Baby Jane? by Henry Farrell

Links on Amazon and Goodreads

Baby Jane, a child star of early vaudeville, resented having to grow up in the shadow of her prettier sister Blanche Hudson, who became Hollywood’s reigning love goddess. Now, some fifty years later, they are together and alone. And reality has toppled crazily into eerie fantasy. Blanche now finds she is growing old in the shadow cast by Baby Jane — and a very sinister shadow it is.

The word, “sinister” turns me on. Judge me as you want, but it does, every single time.

This, this is one of the best. Secrets, regrets, resentment, outright hatred, craziness but still a hint of love and possibilities. If you are all “sunshine” and happiness, read this. I hope you become more human in all its sinister, dark but real facets.

A modern gothic tale, but timeless.

The movie versions were brilliant as well. The original one in 1962 with Joan Crawford and Bette Davis was a fucking masterpiece, but the 1991 TV version with Lynn Redgrave and Vanessa Redgrave wasn’t half bad either.

But back to the book: 5 full stars.

My review on Goodreads

12 thoughts on “WHAT EVER HAPPENED TO BABY JANE? by Henry Farrell #BookReview #5stars #Gothic”